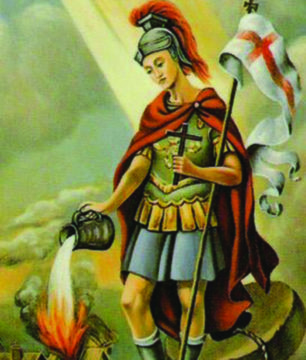 Saint Florian was an officer of the Roman army. He was the commander of the imperial army responsible for organizing fire fighting brigades.  Among the miracles attributed to St. Florian, he is said to have stopped an entire town from burning by throwing a single pitcher of water on the blaze.

In 1935, a statue of St.Florian was unveiled in Vienna.  It stood at the main firehouse of Vienna, in the city’s main square.  After the firehouse was bombed in 1945 during WWII, the Saint Florian statue survived.

Many miracles of healing are attributed to him.  He is a protector in danger from fire and is the Patron Saint of Firefighting.